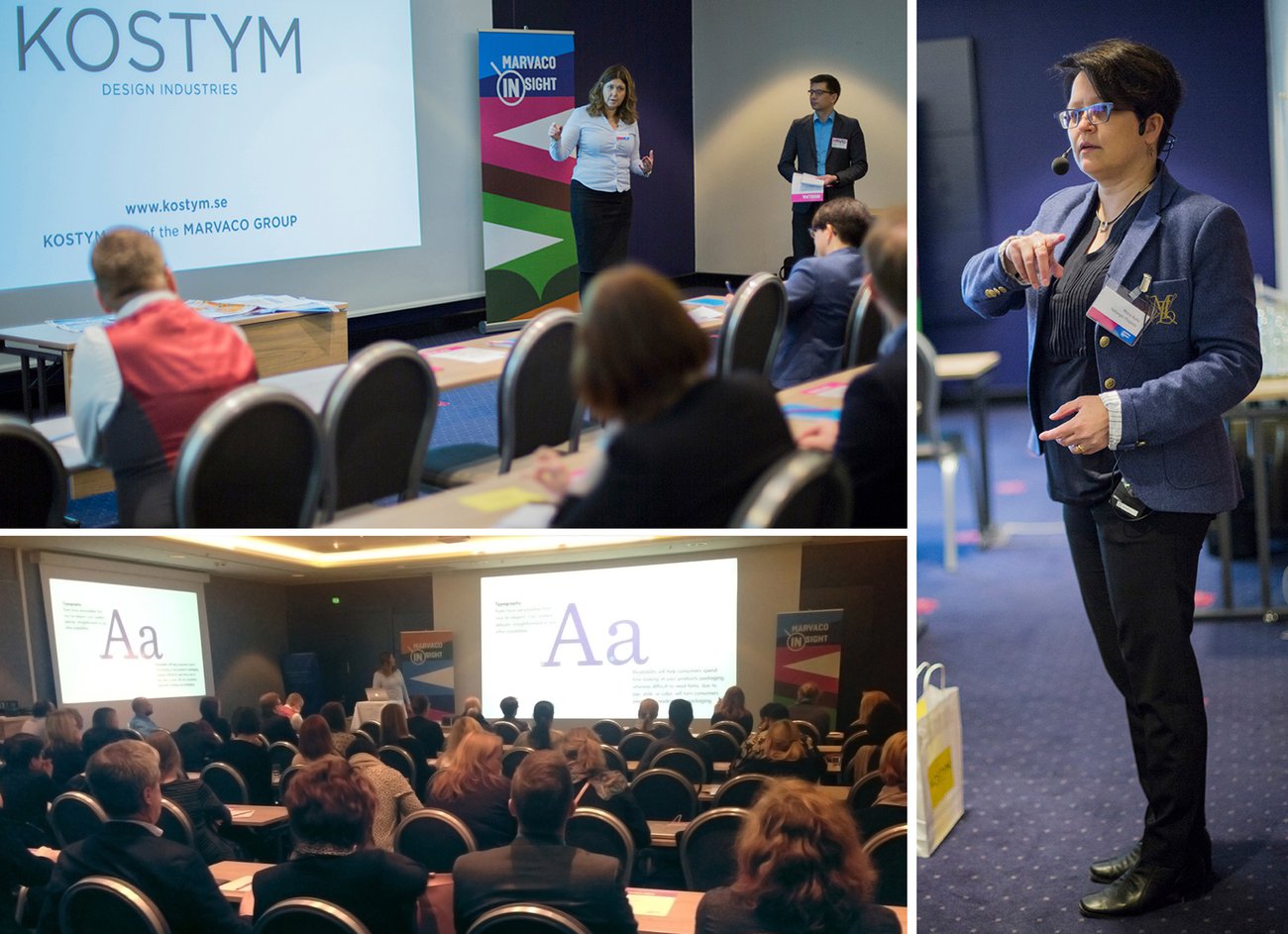 The traditional Marvaco InSight seminar, aimed at brand owners in the packaging industry, was organised at the Radisson Blu Royal hotel in Helsinki in April. This year, the theme of the seminar was “the shared future of the packaging and the consumer”. Minna Autio, a consumer studies researcher from the University of Helsinki and Helen Högberg, the Managing Director of the Swedish company Kostym Designindustries, were invited to the seminar as guest speakers. The event was opened by Kai Lankinen, the Managing Director of Marvaco.
EXPERIENCES FOR THE CONSUMERS
The first guest speaker was Helen Högberg, who spoke about the effects packaging has on consumer behaviour. Helen started her presentation by describing the decision process and psychology related to the consumer’s buying behaviour. She presented fascinating views about consumer behaviour and consumers seeing packages at the shop shelves.
Helen had interesting reflections to offer about the current change in consumer buying behaviour and the rise of networks and a culture of recommendation, as well as their impact on packaging artwork. According to Helen, ecological factors, such as the recyclability and reusability of the packaging, will also gain significance when it comes to decision-making. Consequently, these factors cannot be ignored in packaging design.
Even though factors such as consumers, values, consumer buying behaviour and distribution are constantly changing, certain aspects of packaging still stay the same: the packaging should be simple and functional, it should be recognised as a part of the brand and it should offer enjoyable experiences for the consumer.
THE ROLE OF PACKAGING IN THE FUTURE
The second guest speaker was Minna Autio, who studies matters related to consumption at the University of Helsinki. Minna has years of experience of studying consumption patterns, and her views on consumer behaviour opened new perspectives on the role packaging may have in the future. The packaging should take the consumers’ changing needs into account more extensively as the world becomes more digital.  The packaging is no longer a “silent salesman”, but an “active servant” that acknowledges the needs of the consumers.
Minna also commented on the amount of food waste, which can be affected through package sizes. In Finland, as much as one third of the food produced for human consumption ends up being thrown away. Packaging waste and matters such as the effective recycling of plastic will also become great challenges in the future, and many brands around the world are already campaigning for more effective recycling.
The presentation’s case studies illustrated how the consumers’ image of a brand affect the “taste” of the brand and the consumers’ sensations. Many studies show that consumers have a hard time recognising tastes if they are not using their other senses or if the colours, scents, packaging or other factors have been removed.
The changes in retail and its effects on consumer packaging were discussed in groups. As online trade increases, the role of packaging may change and it may start having new functions. The groups estimated that a recognisable brand image will have a more significant role in the future, as there are no size limits on the global, digital shelves and there is a greater selection of products in the same product group. The changes in consumer buying behaviour may also be very radical as the online stores become smarter and increase their knowledge of consumers. Regardless, it is clear that brands and images will affect consumer behaviour more significantly in the future. The dialogue between companies and consumers, consumer participation and listening to consumers will also have an increased role. In the future, the value of products will be created through increased collaboration between companies and consumers.
The Marvaco InSight events are reviews of the packaging industry’s core elements, directed at Marvaco’s current and future partners. This year, the event was organised for the fourth time.

Would you like to hear more?
You can get more information about the event from Heidi Valkamo, heidi.valkamo@marvaco.fi
back to news